Equipment are items that include Vests, Helmets, Backpacks, and Scopes. Backpacks have three levels, vests and helmets have four, and scopes have five. Each level is generally better than the last, offering more protection, capacity, or a higher field of view. Some Equipment is event-only.

Backpacks increase the carrying capacity of ammo, consumables, and throwables. Backpacks appear as a colored crescent-like shape on the player's back. Backpacks cannot be dropped from the inventory, therefore they can only be looted from world spawns or other players.

Helmets reduce Headshot damage by a percentage based on the level of the helmet. They also reduce body shot damage, but to a lesser degree (only 30% of their usual effectiveness). They appear as a smaller colored circle on the player's head. There is a level four helmet, but it is just a prototype that other Level 4 Helmets use and tweak.

Vests reduce the amount of body shot damage dealt to a person by a percentage based on the level of the vest. Unlike helmets, they do not affect headshot damage, leaving the player vulnerable if they have no helmet. They appear as a coloured outline around the player.

Scopes increase the player's field of view. It is possible to have multiple scopes, and they are not limited by a backpack. Scopes can be toggled between at any time, allowing for versatile play. The 15x scope is the widest and rarest scope in the game. If one is lucky enough to loot it, it will prove extremely advantageous throughout the game. 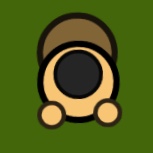 All Level 3 Equipment worn on a fellow survivr

A survivr with armor.
日本語
Community content is available under CC-BY-SA unless otherwise noted.
Advertisement